Private Tom Titcombe of the 1st Battalion, The Wiltshire Regiment died on 15th September 1914, he is remembered on the La Ferte-Sous-Jouarre Memorial. Tom was 38 when he died, found dead on the battlefield, following the Battle of The Marne, there is no known grave.

Tom appeared in the Roll of Honour in the Faringdon Advertiser of December 12th 1914 and is commemorated on the Great Coxwell memorial and in St. Giles Church, the date of his death on the memorial is shown as 14th October 1914
The following eulogy was read by Robbie Burns of Great Coxwell on Sunday November 11th 2018.

Introduction.
I asked David Williams if I could say a few words about one of the names on the memorial stone.  I took the first name on the list of fallen in the 1914-18 war, Tom Titcombe, who you can see recorded here.  My thanks to Gavin Anderson for his wonderful research.

Private Tom Titcombe, (Army number 3793), son of Elizabeth, (known as Bess or Betsy) and George, had 2 brothers, William and Arthur, and a younger sister, Maria.  He was a career soldier. He had enlisted into the Wiltshire Regiment in 1894, served in both South Africa and India, and was 38 years old at the beginning of the War.  The Regiment comprised three battalions, two regular and one reserve battalion.  We find Tom serving with the 1st Battalion, based at Jellalabad Barracks, Tidworth, on 4th August 1914 when war with Germany was declared.  The Battalion was ordered to mobilise at 5.45 that afternoon.   A robust county regiment, it prided itself on its marksmanship with the new Short Lee Enfield rifle, and its ability to march long distances.  It was a disciplined, professional unit of 26 officers and 960 men. 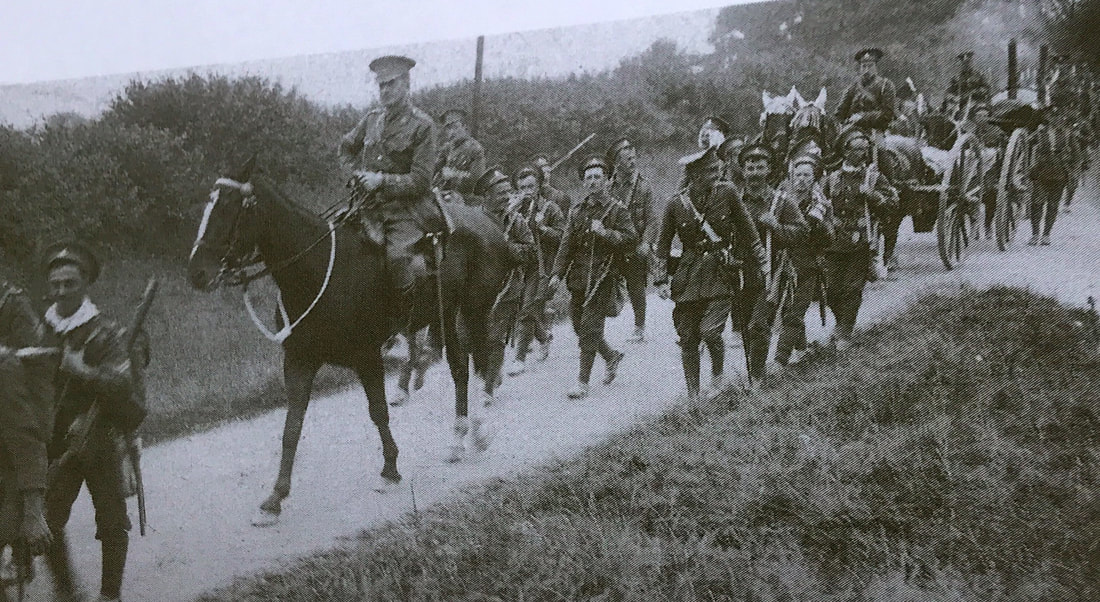 This photograph is of the battalion training on Salisbury Plain in the summer of 1914. The commanding officer is Lt Col Halstead, mounted in the foreground.
On 13th August, they embarked for France from Southampton on two ships, the SS Princess Ena and the SS South Western, arriving in Rouan the next day.  The battalion entrained for the journey East on 16th August and then marched for several days arriving at Ciply, south of the Mons- Conde canal on 22nd August.

The tiny BEF, just 60,000 strong, was divided into two Corps each of two divisions. The French 5th Army was on their right.  The Allies were facing 1.1 million men of the German First Army under Von Gluck.  Tom and the 1st Battalion were dug in shallow shell scrapes and two days later, on 24th August they faced their first engagement and suffered their first casualties. Lt Col Halstead, their CO had his horse shot from under him on the first day of the Battle of Mons, as it became known.

Although II Corps gave a good account of itself, (between 8 and 10,000 German casualties) with the French collapsing on their right, Tom and his chums were ordered to withdraw and fall back on Le Cateau. By 26th August, Tom’s Corps Commander, Sir Horace Smith-Dorien, decided that his men were too exhausted to continue, and ordered them to stand and fight.

Le Cateau was an extraordinary battle.  I have walked the battlefield and stood in the cornfield where Tom and the 1st Bn, the Wiltshires lay down in stubble fields and engaged the Germans at a range of 650 yards.  They had no time to dig in.  15 rounds per minute, accurate rifle fire on a bewildered enemy.  The German infantry thought the engagement was so intense, it must have been machine gun fire.  Ordered to withdraw after several hours of withering fire, Tom’s formation simply stood up and left the field of battle – to quote one of Tom’s colleagues, ‘like a crowd leaving a racecourse’.

The subsequent withdrawal, known as the Great Retreat, some 200 miles all the way back to the River Marne proved gruellingly hard on the well- disciplined battalions of the BEF.
In early September, the British and French forces fought the German onslaught to a standstill on the River Marne. By then, the French Government in panic had entrained to Bordeaux, assuming Paris was lost.   Tom’s battalion was involved in the subsequent counter attack across the River Aisne.  The Battalion suffered heavy losses over 9 days and was finally relieved on 22nd September and given 4 days rest.  But sadly, by then, Tom had been mortally wounded.

Records are contradictory regarding Tom’s death.  The Army War Records record his death as 15th October, this memorial identifies the day before, 14th October as the day he died.  Yet the battalion war diary, written up each day by the Battalion adjutant, records his death at 15th September.

What we do know is that the Battalion crossed the third bridgehead over the river Aisne on 14th September, the railway bridge they had to cross had been shelled, so an improvised footbridge of single planks of wood had been positioned.  They then advanced taking casualties in support of 1 Royal Irish.  Its here that they dug in and this was where Tom quite possibly received his wound in the subsequent artillery attack.  He is recorded has having died of wounds, as opposed to killed in action, which means that he would have been stretchered back to the battalion aide post and then to the Divisional Casualty Clearing Station.  No longer with his mates, and with no morphine to take away the pain, he would have only had a cigarette and his God for comfort.

By the end of October, the Battalion had suffered nearly 1000 casualties and by the end of the War, the Wiltshires had 4924 officers and men killed in action.

Tom’s few weeks of soldiering in France was pivotal to the survival of the BEF in 1914 and the subsequent Allied victory 4 years later.  He was one of the ‘Old Contemptibles’, revered by the New Army and the Kitchener Army that followed, and rightly so.

Tom's memorial is at the Commonwealth War Graves Cemetery at La Ferte-Sous-Jouarre, on the South bank of the river Marne, along with 3764 of his compatriots.
​​ 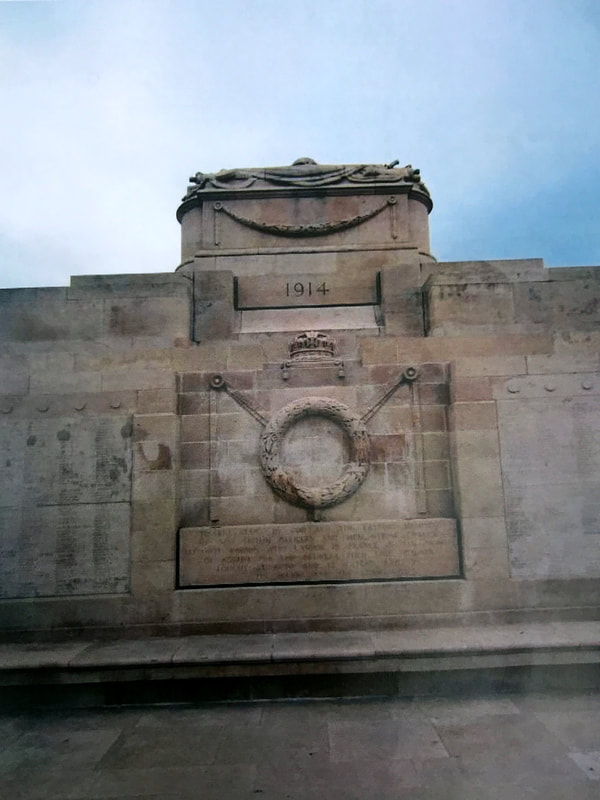 The Commonwealth War Graves Cemetery at La Ferte-Sous-Jouarre, on the South bank of the river Marne.